The Battle of Britain – the early days of the war

The Battle of Britain brought home the realities of war for the British public, as bombs fell on our cities and dogfights were silhouetted against the summer sun. But the RAF had already been in the fight since 1939 and suffered heavy losses.

In 1939, The RAF was active in patrolling British shipping channels, protecting British naval assets, and attacking German navy vessels. The Luftwaffe and RAF engaged in skirmishes at sea and the Luftwaffe inflicted heavy losses, benefitting from more technologically advanced aircraft and battle-hardened pilots. 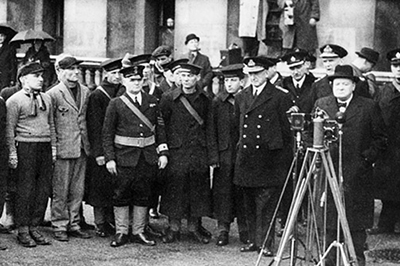 As Hitler's forces invaded Western Europe, Britain joined in the efforts to stop the German advance.

These squadrons took heavy losses in battle and in June the surviving personnel and aircraft were evacuated on board the HMS Glorious aircraft carrier. The Glorious and its accompanying destroyers, Ardent and Acasta, were attacked by German battleships and all three sank.

The UK lost 1,700 military personnel and only two RAF pilots were rescued from the sea.

Hitler's advance continued and on the 10 May 1940, German forces invaded France, Holland, and Belgium. The RAF fought valiantly in the Battle of France and the subsequent evacuation operations, again suffering heavy losses against the Luftwaffe's experienced pilots and the more technologically advanced aircraft.

With Hitler controlling all of Western Europe, Prime Minister Winston Churchill realised that the war was coming to Britain and that British air forces would be tested, saying on 4 June 1940, "We shall fight with growing confidence and growing strength in the air, we shall defend our Island, whatever the cost may be…"

And just days later, still seeking to prepare the public for what lay ahead, Churchill said, "The Battle of France is over. I expect that the Battle of Britain is about to begin…The whole fury and might of the enemy must very soon be turned on us. Hitler knows that he will have to break us in this island or lose the war."

With the Battle of Britain looming, the RAF had already lost more than 1,090 aircraft and 330 pilots in the Battles of Norway and France.