How the RAF helped a Derbyshire town bolster its flood defences

In our second blog to mark the 75th anniversary of Operation Manna, we take a look at one of the more recent humanitarian aid missions undertaken by the RAF. Record rainfall last August had left a dam in Derbyshire in danger of breaching its defences, threatening a town below. Within hours of receiving the call, a Chinook was on site, dropping tonnes of gravel to shore up the defences. Chinook pilot Flt Lt Matthew Smyth tells us more.

There is a Chinook crew on standby 24 hours a day, 365 days of the year to respond to incidences of terrorism or in case of a MACA call out (Military Aid to Civilian Authorities). 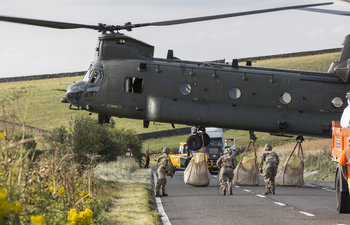 I was on call that night and we’d been watching the news, so we weren't surprised when the call came in. I've been on standby many times, but this is the first time I was involved in a civilian operation of this kind.

We arrived at the Toddbrook Dam at around 4am and got straight to work. We were shown a stack of gravel bags and asked to take it to the breach and plug the hole. Our training means we are well used to flying with heavy loads underneath; carrying six tonnes of gravel is a simple job.

What was different was we were asked to drop the bags rather than placing them in position. Added to that the proximity of the fencing and we had a challenging job.

It was difficult but it was what we train for. It's like going on operations, you are focussed on the job you have to get done. Dropping the gravel was something we don't do every day as when we’re in training we always land the load and it's either unhooked on the ground or from the aircraft.

It is a great feeling to know you are doing something that really matters. There is an entire town that is still there now because of what we were able to do.

Op Initiate went on for almost 40 hours, moving 600 tonnes of gravel to ensure the town of Whaley Bridge immediately below the dam, was saved. Not all heroes wear capes, some of them fly Chinooks.

Flt Lt Smyth has served in the RAF for 13 years and is currently based at RAF Odiham. Next year he will lead the Chinook Display Team during the air show season.