For troops involved in Operation Manna, one of the RAF's first humanitarian aid missions, the knowledge they were helping to save lives rather than destroy them was key. Air gunner Warrant Officer Dave Fellowes was one of those tasked with dropping food for the starving Dutch people during WWII. He tells his story in this blog. 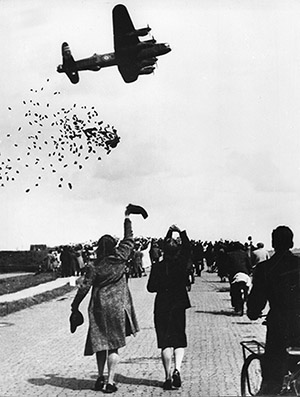 Supplies are dropped from a Lancaster bomber over Holland. MOD/Crown Copyright.

People were desperate. They were eating cats, dogs, rats – even grinding up tulip bulbs to make flour. Allied Forces were called upon to help end their plight by dropping supplies from the air.

German forces agreed not to fire on the aircraft delivering the aid and the air drops began on April 29. In total more than 7,000 tonnes of supplies were sent to Holland, including 1,800 tonnes of flour, 50 tonnes of yeast and 170 tonnes of milk powder.

Warrant Officer Dave Fellowes served with 460 Squadron in Bomber Command and took part in the mission.

Lancaster and Mosquito bombers were adapted to carry the unusual cargo and air crews were trained to drop at 300ft, so provisions landed on the ground undamaged. The US Air Force joined the mission two days later, codenamed Operation Chowhound, and airlifted an additional 4,155 tonnes of supplies.

Their life-saving mission is remembered at special memorial events in Holland and this year a tulip mural has been planted at Lincoln Cathedral in thanks to the Bomber Boys. Their legacy sees the RAF at the forefront of any Western response to humanitarian need. 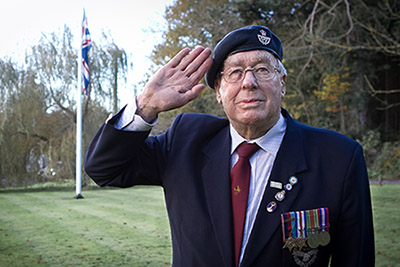 Like the RAF, the RAF Benevolent Fund exists to fulfil the needs of those it serves.

For Dave time spent at the Fund’s Princess Marina House care home in Littlehampton is precious.

He said: "It is one of the finest places you can go to. It is five-star treatment, it really is beautiful.