La guerre est finie – the war is over! 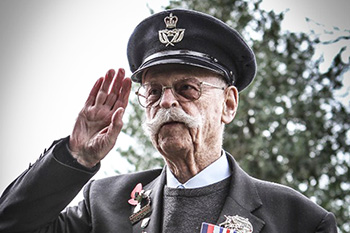 Eric says: "I was sitting in the Montgomery Club in Brussels having a few drinks with my colleagues when a authoritarian-looking figure walked in, mounted the stage and said 'Gentlemen – I'm here to tell you the war is over!'

"We felt really elated – I took over an ice cream cart and cycled up and down and the other chaps commandeered an old steam engine – we just couldn’t quite believe it was all over and I think we all felt this sense of relief! I joined the RAF when I was 18 and after four years it was hard to believe this was it! It felt terrific.

"We returned to base in Swanton Morley in Norfolk just before VE Day was announced and I ended up celebrating in Romford in Essex after a few of us decided to join the parade there. The atmosphere was amazing – everyone was getting drunk and hugging each other. I remember there was plenty of horseplay with us climbing lamp posts and just enjoying ourselves!

"The streets were packed and as we were all in uniform we were congratulated and hugged by so many people – I've never seen scenes like it – we certainly enjoyed ourselves! There was just this tremendous air of relief and excitement to see what peacetime had to offer."