Living through the Blitz – 100 days of bombing

The late Fred Hammond was just a teenager during WWII when Hitler switched tactics and began to rain bombs down on British cities. In this blog, Fred described what it was like to live in London during the Blitz.

"It was four in the afternoon and a crowd of bombers came over and we were near the air raid shelter. My father gave me a shove down to the shelter because he realised what was going to happen. They had been bombing the airfields then they came to bomb the factories. There was my father and myself and another chap who was moving in upstairs. 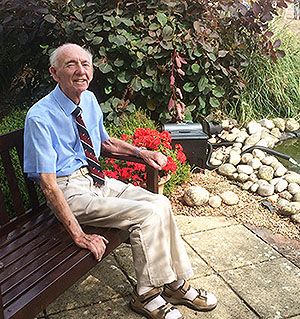 "It was one hour and 40 minutes before we got the all clear and there was quite a lot of bombing and devastation when we got out. At 6.40pm the siren went off again and we were down there until six the next morning. And that was the start of almost 100 days of bombing."

The Blitz began in September 1940, shortly after a German bomber lost his bearings and dropped his load on London instead of his intended target.

This mistake marked a new period in the Second World War when the Luftwaffe and the German bombers deliberately targeted residential areas.

At the same time, British fighter planes were embroiled in an airborne fight for supremacy which became known as the Battle of Britain.

Fifteen-year-old Fred was living in West Ham with his father, having avoided evacuation to help care for his terminally-ill mother. Every evening they would head down into the Anderson shelter built in their garden.

"You could hear the bombs coming down. I can remember the bombing was going on and we heard this bomb was coming and my father said 'this one is going to be close' and it dropped somewhere about 30 yards away from us. We were safe, we were not injured. We took it in our stride and just went on.

"It is something you get used to, surprisingly. While you were not being injured it was all exciting and being young you did not have any fear."

Soap boxes with a plank laid between them and cushions and blankets made the shelter more comfortable for a night's stay.

Then the following morning they would emerge to survey the damage. Fred said West Ham was one of the worst areas affected, with every property damaged in some way. In daylight hours, gangs of workmen would tour round, fixing what they could.

Every sixth night, Fred's father who worked as an engineer, would work a shift fire-watching.

"I would be on my own. I wasn't quite 15 and I could hear the bombs coming down. There was nobody to go to anyway because most of the women and children had been evacuated."

Two years later when this brave teenager reached 17, Fred joined the Royal Air Force and after serving at several UK airfields, was deployed to the Far East where he was stationed when the war was over and peace declared on Victory in Japan Day, 15 August 1945.