When the RAF is called upon to help deliver humanitarian aid, a swift response is essential. You can't get swifter than arriving at work at RAF Brize Norton in the morning to dropping five tonnes of aid in Iraq by the evening. Hercules pilot Flt Lt Daz Ryllo and his crew did just that when UK Aid sent supplies to refugees isolated on a mountainside. 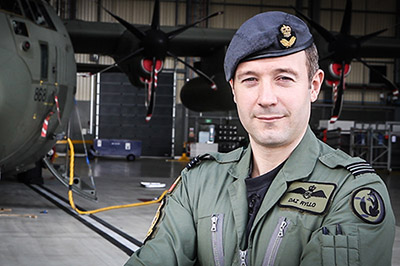 During the summer of 2014, violence in Iraq had intensified and as a result a group of Yazidi Iraqis had fled into the mountains to escape.

They found themselves holed up on Mount Sinjar in August which was not a hospitable place to be, high above sea level without free-flowing water sources.

At the Iraqi government's request, the RAF and US Air Force stepped in to deliver aid by air.

Daz explained: "There was a massive effort through UK Aid [the Department for International Development] to drop supplies to these people, mainly water and shelter, to help these people survive through the long days before they could be extracted off the mountain.

"It spun up very quickly. We had very little time to prepare, we simply packed our bags and got on the aircraft. After crew rest in Cyprus we completed the first operational drop that evening."

The 50,000 to 150,000 people sheltering on the mountainside were suffering from sunstroke, heat exhaustion and dehydration and urgently needed the water, shelter and lanterns the crews were able to deliver.

The lanterns included solar-powered mobile phone chargers to allow rescuers to communicate with the refugees to arrange for their descent from the mountain.

Daz said: "For me it was a major achievement in my life, to be part of the team that conducted this mission. It was very clear from the outset, from UK Aid, that the stores we were dispatching were life-saving stores."

Life-saving operations like this can only be carried out with the support of family at home. In turn the RAF Benevolent Fund exists to support those families as well as the serving and retired RAF community.