RAF100 represents a century of service for one RAF family

The Royal Air Force's centenary is a moment to celebrate for all RAF personnel. But for one serviceman there is more cause for reflection – his family has been a part of the service for almost as long as it has existed! 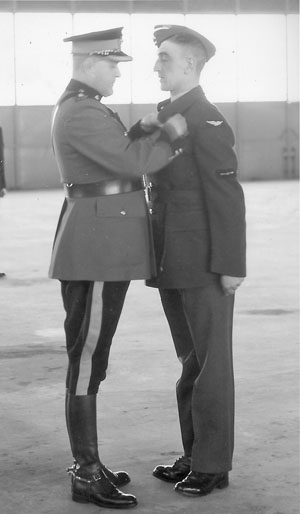 It is a legacy which could not have been possible without the RAF Benevolent Fund which supported two generations of the family, allowing them to continue their long family service.

When Squadron Leader Mike Waring joined the RAF in 1995 he was the fourth generation of his family to take to the skies in service of their Queen and country. He continues the family legacy started by his great grandfather Wada Pickard who flew FE2bs and transferred from the Royal Flying Corps to the newly-formed Royal Air Force in 1918.

He said: "I am incredibly proud of our family’s RAF heritage and of everything the Warings and my family have done, during the First World War, the Second World War and subsequently. I am proud that my service continues that tradition."

After Wada Pickard was de-mobbed following the end of the First World War, his grandfather, Freddie Waring, took up the mantel. Initially joining the Army in the 1930s he then became a Policeman until finally transferring to the RAF in 1942. He completed pilot's training in Canada and went on to fly with 620 Squadron providing, among other things, support to the Resistance, supply drops and laying mines. Tragically he was killed in action when his Stirling was shot down on New Year's Day, 1945.

Mike, a Puma pilot now OC 57 Squadron at RAF College Cranwell, followed in the steps of his father Squadron Leader David Waring. David, also a Puma pilot, served in Singapore and Borneo during a 36-year career.

Mike added: "As I reflect on our family's history of service in this, the RAF's centenary year, there has been one other constant in our lives – the RAF Benevolent Fund. All of my family have known the comfort that the 'safety net' of the Fund brings to all RAF personnel, past and present. The knowledge that should the worst happen, we are not alone.

"For the Waring family, the difference the RAF Benevolent Fund has made is immeasurable. My father was supported through school and the help certainly made his, and my grandmother’s life as a single parent, far easier. For myself, the support has been even more dramatic. Our daughter Gemma has severe and complex additional needs, including delayed learning, which means she needs extra support at school and at home.

"The RAF Benevolent Fund has provided swimming lessons and Riding for the Disabled classes which have enabled Gemma to overcome her fears, and help her develop both physically and mentally."

David added: "As a young child, born six months after his father died, there is no doubt I benefitted greatly from the Fund’s assistance. As a single working parent I am sure my mother would not have been able to provide me with many of the things she was able to do with the help of the Fund. To be able to go gliding, and pay the extra to gain my private pilots licence, all of which I’m sure helped me to join the RAF, is something that I am sure would have been beyond her means. It is wonderful to now see what you are able to do for my granddaughter."