On Monday 29 October, a number of Royal Air Force Benevolent Fund supporters attended a luncheon at Buckingham Palace, hosted by the RAF Benevolent Fund's President, His Royal Highness The Duke of Kent KG. 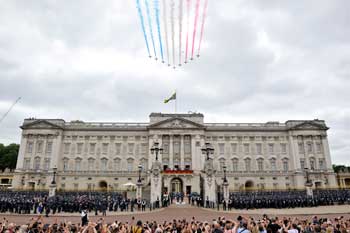 The lunch provided an opportunity to introduce the RAF Benevolent Fund's centenary plans to supporters and to encourage their support and commitment to help the charity to reach even more members of the RAF Family in its centenary year.

Guests included Lord Hugh Trenchard, grandson of the founder of both the Royal Air Force and the RAF Benevolent Fund, and Air Chief Marshal Sir Stephen Hillier, Chief of the Air Staff. Controller of the RAF Benevolent Fund, Air Vice-Marshal The Honourable David Murray, spoke to guests about developments across its welfare services and why 2019 will be a pivotal moment in the charity's history.

"We are extremely grateful to our President, His Royal Highness The Duke of Kent, for hosting us in the wonderful surroundings of Buckingham Palace. It was a fantastic opportunity to introduce the RAF Benevolent Fund's centenary campaign to friends old and new and to look forward to how we can build on the work of the Fund over the last hundred years."