This Tuesday, thousands of spectators gathered in London to watch the thrilling finale of the Royal Air Force's centenary celebrations, culminating in a 103-aircraft flypast.

The day began with a poignant tribute and a moment to reflect on the service of all RAF personnel with a wreath-laying at the RAF memorial on Embankment. Whilst a trumpeter played the Last Post wreaths were laid by the Chief of the Air Staff Air Chief Marshal Sir Stephen Hillier and Air Vice-Marshal David Murray, Controller of the RAF Benevolent Fund which is the Memorial's guardian.

Tributes continued with a special service held at Westminster Abbey attended by members of the Royal Family, including Her Majesty the Queen, Prime Minister Theresa May and more than 2,000 guests for an address by the Archbishop of Canterbury, the Most Reverend Justin Welby. 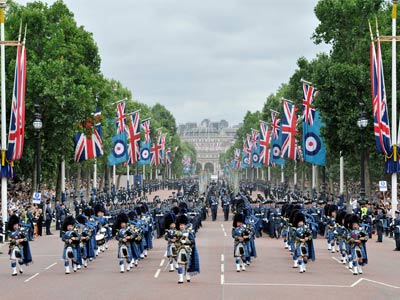 Prince William wore the No 1 uniform of the Royal Air Force, and his RAF wings, in recognition of his RAF pilot qualification.

Crowds were then treated to a spectacle of more than 1,300 RAF personnel resplendent in full dress uniform, parading from Wellington Barracks down to Horse Guards Parade and The Mall, ending in the forecourt of Buckingham Palace.

The Queen then presented the new Queen's Colour to the RAF and spoke of the 'remarkable contribution to defence' over the last 100 years and praised the Royal Air Force for its 'tenacity, skill and gallantry'.

Thousands of spectators gathered as the Queen and members of the Royal Family watched the biggest display of military aircraft in recent memory from the Buckingham Palace balcony.

Puma and Chinook helicopters began the extravaganza followed by a mixture of vintage and modern aircraft as well as the RAF’s newest the F35 Lightning. In their biggest ever formation 22 Typhoon jets spelt out the number 100 before the Royal Air Force's aerobatic display team, the Red Arrows drew the spectacle to a close, painting their iconic red, white and blue smoke across London's skies.