A spectacular dinner in London hosted by the April Fools Club marked the start of a year-long fundraising campaign to raise £1million for the RAF Benevolent Fund. 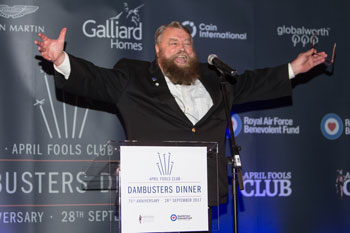 Plaisterers' Hall in Central London provided the glamorous venue for 300 guests to enjoy an evening of entertainment and fundraising.

The event, which raised over £100,000, was organised by the April Fools Club, a group of former RAF officers and likeminded businessmen, as part of the fundraising efforts to commemorate the 75th anniversary of the Dambusters raid.

Brian Blessed hosted the evening which featured performances from string quartet Escala, magician Lance Corporal Richard Jones and jazz singer Jeanie Barton. Guests enthusiastically took part in a live and silent auction which featured some fantastic prizes such as a week's skiing for four in Courchevel, France, and the chance to fly in a Spitfire in a close formation sortie.

Throughout the evening guests were reminded why they were there through speeches by Chief of the Air Staff Air Chief Marshal Sir Stephen Hillier, the RAF Benevolent Fund’s Controller Air Vice-Marshal David Murray and military historian Max Arthur and were shown films of RAF Benevolent Fund beneficiaries and the last remaining British member of the Dambusters squadron, Johnny Johnson.