"Sport helps me to switch off and focus"

Former RAF driver Matt Neve discovered the rehabilitative nature of sport following his medical discharge from the Service in 2004. A tour in Iraq as part of Op Telic had left him suffering from PTSD, and it led to him leaving the job he loved. As part of Mental Health Awareness Week, we chat to Matt about his journey from medical discharge to recovery. 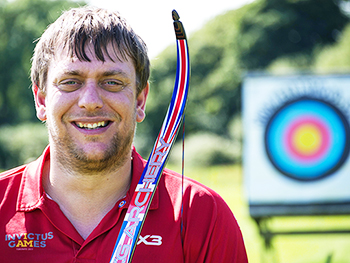 Three years after he joined in 2001 aged 16, Matt was medically discharged from the RAF in 2004, suffering from PTSD. He had been deployed to Iraq in 2003 as part of Op Telic 1. His role as driver loading the injured servicemen and women onto military aircraft for repatriation took its toll and he was eventually medically evacuated himself.

Matt was so affected by his time in Iraq he was unable to tell his partner Zoe about it for six years. All she knew was he had been in Cyprus and was mentally ill, he had not even been able to tell her he had been in Iraq. Coming to terms with his experiences has been a long process for Matt and it is only recently he has been able to share those experiences with Zoe.

Matt says: "Sport has helped my recovery by giving me something to focus on other than my mental health; it helps me switch off and focus.  It makes me look forward to what I can achieve and aspire to. Most of all it makes me believe in myself."

Thanks to a chance remark from a friend who suggested Matt try out a new sport, his recovery took a new, positive turn.

Archery has given Matt renewed self-worth and self-confidence and a new focus in his life. He is committed to achieving all he can and trains up to four times a week. For him, the simple act of drawing the bow allows him to shut out the rest of the world, the noise and the clamour and to concentrate his mind on hitting the target. This mindfulness and awareness has enabled Matt to take new steps in his recovery.

He said: "The RAF Benevolent Fund are really the heart of the Royal Air Force family. When you join the RAF you do get told all about them but you don’t realise who they actually are until you get talking to them and you need their help and support. And it does make you aware that they really are out there to help and serve the Royal Air Force veterans and serving personnel."

Find out more about the mental health support offered by the RAF Benevolent Fund for serving personnel and for veterans.