Sandy Saunders was just 22 years old when his aircraft crashed and caught fire. On impact, he was knocked unconscious and awoke surrounded by flames. Sandy miraculously freed himself from the wreckage and was subsequently treated at East Grinstead Hospital for severe burns across his face and body. 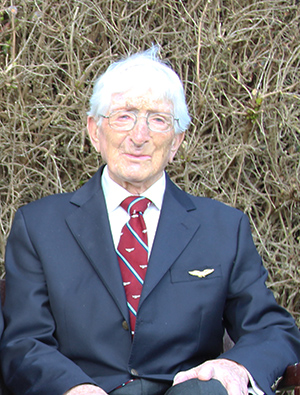 In the early years of the war, Sandy worked in gun laying radar with the Royal Electrical and Mechanical Engineers but later retrained as a Glider Pilot.

On a training exercise in 1945, the Tiger Moth he was flying lost control while attempting a landing due to heavy cross winds. The aircraft crashed and caught fire, killing the navigator instantly.

Sandy was knocked unconscious but eventually came to and crawled from the fuselage.

Sandy said: "I was knocked out when I hit the ground and I came to with the whole aircraft in flames...the chap who was in the front cockpit, who was acting as navigator, died instantly."

"I suppose climbing out of an inferno of a burning small plane was just an act of God."

Sandy suffered 40 per cent burns to his face, legs and hands and was initially treated in Birmingham where he underwent eight or nine operations, including skin grafts to replace his eye lids.

Sandy recalls the first time he saw his reflection in hospital: "There was a mirror on the wall over the wash basin and I was just horrified by what I saw."

Unfortunately his skin grafts failed and so he sought treatment at East Grinstead where he became one of Archibald McIndoe's Guinea Pigs.

Sandy says: "We were patients with a lot in common we had uncomfortable treatment and there was always somebody worse than you were, you tended to accept your disfigurements or other problems. You could not feel sorry for yourself when you saw people who'd had 60 operations, which was commonplace, and people who had lost both legs."

In total, Sandy endured 28 operations following his accident, and his treatment by Sir Archibald inspired him to pursue a career in medicine. He retrained as a general practitioner and practised for 40 years.