When the Pacific islands of Vanuatu were devastated by Cyclone Pam, the international community rallied to help. The RAF's C17 fleet was ideal to help deliver the humanitarian aid to such a remote corner of the ocean. To mark the 70th anniversary of one of the RAF's earliest humanitarian aid missions, Operation Manna, pilot Flt Lt Ryan Foils describes what it was like to be part of the disaster relief effort. 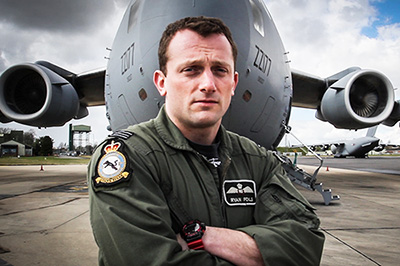 He said: "The first thing that strikes you as you approach the islands is the natural beauty of them. Then as you get closer the hard hitting fact is that it has been devastated by the cyclone that has gone through and you realise it is a poor nation. The devastation was widespread, homes had been destroyed, lives had been ruined and livelihoods had been lost."

In March this year Ryan and his crew were on a routine exercise in Arizona when they were diverted to join the aid mission. Days later, under the auspices of UK Aid, they joined the operation, based out of Brisbane, Australia. The response had been immediate and extensive. The volume of aid landing in Vanuatu meant air crews were given little time to unload and clear the airstrip.

Ryan explained: "The main thing that stays in my memory is the sight of all the aid on the side of the airfield and the amount of people who were there trying to get the problem sorted, in a relatively short period of time."

More than 75,000 inhabitants were displaced by the cyclone which brought destructive 185mph winds as it crossed the 80 islands which make up Vanuatu. The islands’ 260,000 residents needed basic supplies as the storm had wiped out infrastructure, power lines, and homes. The aid mission delivered lanterns, power supplies, basic food stuffs, electrical supplies and sanitation.

Ryan said: "The UK government has the asset in the C17s to respond quickly and that is why we were mobilised to take the aid. It made me feel very happy and very satisfied in my job. That is not to say that I do not normally but this was something so different and so important to so many people, it mattered so much more."