The story of the Dambusters

The Dam Busters were members of the RAF's 617 Squadron who were specially assembled in March 1943 to bomb three dams in Germany's industrial heartland, the Ruhr Valley, just two months later. The raid, on the night of May 16/17, was called Operation Chastise and involved 133 aircrew flying 19 specially adapted Lancaster bombers. 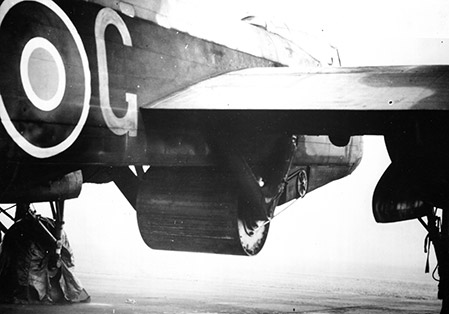 Barnes Wallis, Vickers Armstrong's assistant chief designer, came up with the idea for a unique new weapon, popularly called 'the bouncing bomb', but known by its codename as 'Upkeep'.

It was a 9,000 pound cylindrical mine that was designed to bounce across the surface of the water until it hit a dam.

It would then sink and a hydrostatic fuse would detonate the mine at a depth of 30 feet.

In order to operate effectively, Upkeep had to have backspin imparted on it before it left the plane.

This required specialist apparatus that was designed by Roy Chadwick and his team at Avro, the company that also manufactured the Lancaster bombers.

Turning the idea into reality

There was initial opposition within Bomber Command to the idea of the Dambusters raid, with a number of key figures, including Arthur Harris, seeing it as a mad-cap scheme.

But Barnes Wallis stuck to his guns and eventually won over Air Chief Marshal Sir Charles Portal, Chief of the Air Staff, who instructed Bomber Command to proceed with the operation.

617 Squadron was formed at Scampton in Lincolnshire, with Wing Commander Guy Gibson as its commander. Some of the men aircrew for 617 were hand-picked by Gibson but many were crews who had simply come to the end of their tours, or were due to start their second tours. Gibson had to assemble his aircrews and all the ground staff and auxiliary support needed in just three weeks.

There were just eight weeks of intensive low-level training and technical preparation before the raid. Nobody in the squadron except for its most senior members was aware of the targets until the briefing on the day of the raid itself.

Nonetheless, security was extremely tight and the aircrew were instructed to tell nobody about what they were doing.

Three targets were selected: the Möhne, the Eder and the Sorpe dams. The timing of the raid was contingent on a number of factors including weather, the lunar cycle and the ability to supply the modified planes and equipment. May 16/17 was only selected a few days prior to the raid.

May was chosen because it was when the dams were at the fullest from melting snow in the mountains and would therefore have the greatest impact on bursting the dams.

After being briefed, the aircraft set off in three waves on the evening of May 16, each wave targeting a different dam.

The Möhne and the Eder were both successfully breached, while the Sorpe was damaged but not destroyed.

However, the cost to 617 Squadron was significant.

Of the 19 crews that had set out on the raid, eight did not return.

In total, 53 men were killed and three more were presumed dead though it was later discovered that they had been taken prisoner and spent the rest of the war in POW camps.

Reaction to the raid

"The disaster which you have inflicted on the German war machine was a result of hard work, discipline and courage. The determination not to be beaten in the task and getting the bombs exactly on the aiming point in spite of opposition have set an example others will be proud to follow."

The press also reported the operation as a great success, though for many involved in the raid, and particularly Barnes Wallis, this was severely tempered by the loss of life in 617 Squadron. Wallis wrote that: "For me the subsequent success [of the raid] was almost completely blotted out by the sense of loss of those wonderful young lives."

The exploits of the Dambusters were made into a film in 1955 starring Michael Redgrave as Barnes Wallis and Richard Todd as Guy Gibson.