"Archibald McIndoe did change my life, he made life worth living"

At 22-years-old, Robert 'Mac' Mathieson was left blinded when his Lancaster's windscreen suddenly exploded. Due to the nature of Mac's injuries, he was treated by the pioneering plastic surgeon Archibald McIndoe, becoming one of his 'guinea pigs.' 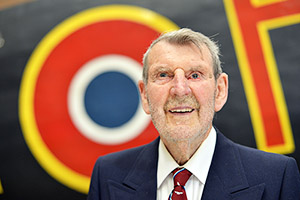 Born in 1922, Mac joined the RAF as a pilot at just 19-years-old. During his career he would accumulate more than 1,000 hours of flight time, operating on 30 combat missions. Returning from Germany on a night mission, the Lancaster bomber's windscreen exploded unexpectedly, causing devastating injuries to Mac.

Mac says: "The windscreen shattered and blew away my face. The skin was pushed back and my left eye was destroyed, leaving me blinded."

Mac was knocked unconscious and the aircraft was landed by the Argentinian co-pilot on board.

When Mac regained consciousness, he was blind and his face was heavily bandaged.  Under the care of Sir Archibald in East Grinstead, he underwent ten operations over the course of almost two years.

Mac speaks about McIndoe: "We called him 'the Boss.' He was a very nice man and would often come into the ward and the play the piano for us for 45 minutes to an hour at a time.

"He did change my life, he made life worth living. He formed the Club. It's a wonderful group of men, helping one another. The spirit amongst us is still great today."

After the war and despite only having 10% vision in his right eye, Mac became a livestock adviser in Yorkshire.