Alan and Ella Morgan met as teenagers and promised to wait for each other during the Second World War - 72 years later they are still enjoying married life. Alan, 92 and Ella, 90, were parted when Alan went off to war with a ring belonging to Ella and a promise to marry when he returned. Ella tells the story of Alan's return from the war, horribly injured and close to death... 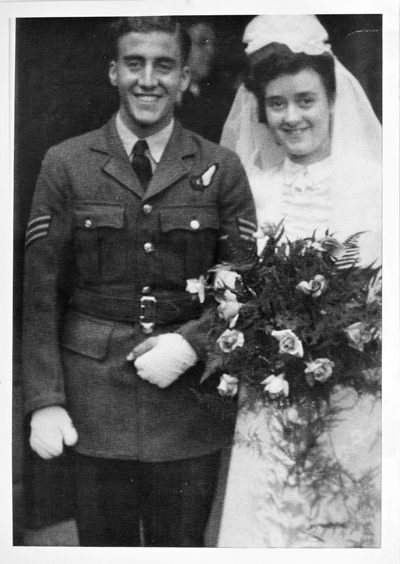 "Alan was due back from the bombing raid over Germany on his 21st birthday and I’d arranged a surprise party for him. But he never made it.

"His Lancaster bomber was hit by flak and the door blew open. A colleague went to close it but passed out due to a lack of oxygen so Alan had gone to help him and close the door. But he passed out as well and his hands got stuck on the frozen fuselage.

"I’d given him a gift before he went. It was a ring, but he only got to wear it for a few days. Back in England he was treated by the famous plastic surgeon Archibald McIndoe, who managed to save his hands but he lost eight fingers to frostbite. McIndoe created stumps from what was left, which meant he maintained some movement.

"I was told Alan had a 50/50 chance of surviving but I knew he would make it, he was a fighter. He was worried I wouldn't want to be with him after the accident, but he was still the same to me and we married three months later – the first day he was out of hospital!

"We'll have been married 72 years on 10 June. I was 15 when we met and Alan was 17. I never had any second thoughts about marrying him. The secret to our marriage success? Love one another. We give each other space and we don’t argue.

"As for the ring, Alan kept it until it was my son, Kenneth’s 21st and he gave it to him on his birthday."

The RAF Benevolent Fund bought Alan a scooter a few years ago, to help him get out and about. More recently the Fund turned the couple's bathroom into an easily accessible wet room.