Eyes in the sky

Reconnaissance – the ability to gather information on enemy forces – was catapulted into the modern era with advances in aviation and photography.

The new capabilities were very much in development at the start of the First World War and were heavily drawn upon as British forces planned and fought the Battle of the Somme from July to November of 1916. 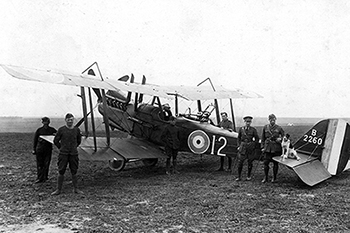 Members of 12 Squadron pictured at an airfield on the Western Front with one of the squadron's RE.8 bomber and reconnaissance aircraft, B2260. (Photo: Air Historical Branch)

During the lead up to and in the course of the battle, 19,000 photographs were taken by the Royal Flying Corps (RFC) and pieced together like mosaics to form maps of the German front line and logistical network.

These mosaics were then used to produce 420,000 prints for planning on the frontline and in headquarters. Yet the very act of gathering the information was incredibly dangerous.

A Royal Flying Corps (RFC) fighter pilot, Cecil Lewis, commented on the dangers faced by reconnaissance pilots: "To fly in a straight line, taking photos of the enemy trenches, an easy [anti-aircraft fire] target, within range of the ground machine guns, bumped by the eddies of passing shells and pestered by enemy scouts, that required nerve. And it would have to be done twice a day, day after day, until you were hit or went home."

But in addition to the production of vital photographs, the RFC provided almost real time information on the movements of British and German troops.

At a time when communication between ground forces in the heat of battle was difficult and unreliable, aircrew provided updates on each side's progress, enemy artillery locations, where reinforcements were needed, and when counter-attacks seemed likely. Updates written on paper whilst in flight could be dropped at headquarters or pilots could report immediately after landing.

Although still in its infancy, air-ground cooperation advanced significantly during the Battle of the Somme and remains vital in operations today.