Arthur John Banham joined the RAF in 1935 and at the start of the Battle of Britain flew the Boulton Paul Defiant.

The Defiant had initial success against the Luftwaffe, but the enemy quickly realised its main weakness: it relied solely on its turret for defence, located behind the pilot, and had no forward-facing defences for head-on attacks. 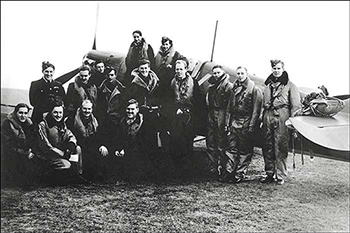 The Defiant took such heavy losses that they were pulled from daytime service after 28 August 1940. It was just a week before this, on 21 August, that Banham's squadron of Defiants moved to RAF Hornchurch in Essex.

In the eight days of operations from Hornchurch, they lost over half of their aircraft and several aircrew.

Banham was lucky. Attacked on 26 August over Manston, Banham and his gunner managed to shoot down one German fighter before being hit themselves. With their aircraft on fire, Banham managed to turn the plane upside down and fall out of the cockpit.

He landed in the sea, eight miles from shore, and was collected by a British fisherman who used his last two gallons of petrol to motor out and look for survivors.

The fisherman also saved one of the shot down German pilots but Banham's gunner, Sergeant Baker, was never found. It wasn't long after this lucky escape that Banham was given command of 229 Squadron at Wittering.

Banham only had one flight in a Hurricane before the Squadron was ordered to RAF Northolt and he again joined in the Battle of Britain.

Banham was shot down in flames on 15 October and again managed to successfully bail out of the aircraft. After landing in an apple tree in Kent, Banham, who was burned in the crash, was sent to East Grinstead for treatment by Doctor Archibald McIndoe.

It was in East Grinstead that Banham was welcomed into the legendary Guinea Pig Club – a drinking club comprised mostly of RAF aircrew who survived fiery crashes and were under the experimental plastic surgery treatments of Dr McIndoe.

This blog is in memory of all those who served during the Battle of Britain.