The RAF Regiment and the Falkland Islands

Corporal Dave Capps proudly served as a Regiment Gunner for more than 22 years, serving in a number of conflicts including Ulster, the Falkland Islands, the first Gulf War and Bosnia. His squadron was one of the last to leave the Falklands. This year marks the 75th anniversary of the RAF Regiment and in this guest blog he tells us about his experience and how the RAF Benevolent Fund later supported him with PTSD.

Being part of the RAF Regiment has been a big part of my life – I joined when I was 17 and a half and was discharged when I was 40. 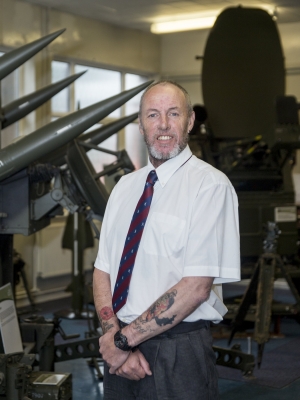 I served in a number of operational areas from Ulster, the Falkland Islands, the first Gulf War through to Bosnia. The Regiment gets all over the world but people are rarely aware of all the areas we've been involved in.

One of the less well-known operations was the ground-based air defence that the Regiment provided for Port St Carlos, Bridgehead and the Harrier strip where the aircraft were working from in the Falklands.

In 1982 I was in Germany based with the Rapier Squadron and arrived in Port St Carlos on board the SS Canberra, travelling with the Welsh and Scots Guards and the Gurkhas.

My role was to man radio nets, relaying information in and out and informing the Rapier systems whether they could fire, and giving air raid information.

I was 21. You spend your entire career training for war and when you go down to something like that you're elated because you're going to do the job you're trained for. It's not until you've been there a while that things tend to sink in - this isn't a training exercise – this is for real. But the training takes over your responses, the way you behave is automatic. If you had time to think about anything you wouldn't get the job done.

Afterwards when you do get time, you think, 'Hell, that was close – that could have been us...' The majority of us went down there with no history of conflict or combat experience – a lot of young men and boys went but a lot of men came back having experienced conflict first hand.

There is nothing to match the RAF Regiment, it is so close. It's a family, a band of brothers. At the end of the day you wear the Regiment mud guards on your shoulder and that makes you part of the band of brothers.

The comradeship, the brotherhood that exists is immense. You have different roles in the Regiment and there is rivalry between the roles, but we all link together. You cut one and they all bleed.

I left the RAF in 2000 and was diagnosed with PTSD. In 2010 I had a breakdown, which left me unable to leave my house. I went from working full-time as Health Physics Supervisor in the nuclear industry, running a 14-man team, to being unable to cope. I fell apart. I stopped working, bills mounted up and I had issues in my personal life.

The RAF Benevolent Fund was there when I needed it, providing me with some financial assistance – I couldn't have managed without them. I still find things difficult now; I'm hyper-vigilant and have found it difficult to go back to work.

As a member of the Regiment, knowing that the RAF Benevolent Fund is behind us supporting us now and in the future is always a comfort.