"They asked my mother where they should bury me"

Flying Officer Desmond O'Connell was just 19-years-old when he joined the RAF as a Volunteer Reserve before the war started. Aged 21, his unit was sent to sink the Bismarck, a mission that would see him become one of the founding members of The Guinea Pig Club. 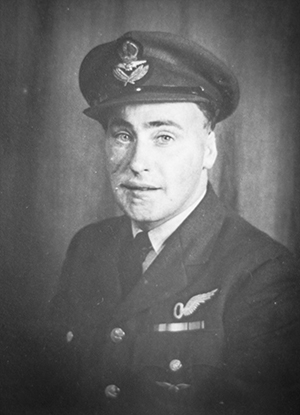 Born on 19 December 1919, Desmond was one of eight children.  In 1938, aged just 19, Des joined the RAF Volunteer Reserve alongside his brother, Jack, who was a year older.

On passing out, Des was assigned as an observer to 502 Squadron Coastal Command, operating from RAF Limavady. On the 27 April 1941, aged just 21, Des, alongside six other crew members were commissioned to locate and sink the German capital battleship Bismarck.

To carry out the operation, their aircraft, the Armstrong Whitworth 'Whitley' Mark V was heavily overloaded with an additional crew member, tanks of fuel, and bombs. The extra weight meant that the Whitley was unable to clear the mountains by RAF Limavady once it took off, resulting in the aircraft crashing.

The fuselage broke open upon impact but miraculously all crew members survived and managed to escape the aircraft. With a cracked head, Des crawled from the wreckage which was filled with the fuel from the leaky tanks, soaking his clothes and hands. When he was finally free, the ground outside was alight, causing his clothing and body to ignite.

Des recalls: "I remember looking through the flames and seeing something hanging off my hands and I thought it must be my gloves but it was the skin from my hands."

Fortunately all the crew had been issued with American leather flying jackets, trousers and boots and these helped to save Des's body from the flames and prevented further burns injuries. The early morning cold air temperature also helped to seal the extensive burns to his hands and arms which helped to reduce the bleeding from his wounds.

Des walked three miles or so to a farmhouse where they sought help. Instead of going into the warm farmhouse the crew stayed in the barn where the inside was quite cool while others ran to call an ambulance from a nearby telephone box.

Initially taken to Roe Valley Cottage Hospital in Limavady, his mother grew concerned about her son's medical treatment and recovery.

Des tells us: "A Squadron Leader said to my mother, 'You can have him buried here with military honours.' And my mother raised a bit of Cain and I was then flown back to Halton. Archibald McIndoe came down one day and took eight of us."

Sir Archibald McIndoe, the RAF burns consultant, took Des to the Queen Victoria Hospital in East Grinstead and carried out virtually every operation on Des, including ones to his eyes, hands and buttocks. Des remained at the hospital for more than two and a half years, where he underwent operations, skin graphs and mental rehabilitation, to help with social reintegration within the local community.

Des recalls: "Sir Archibald looked at us and said 'Right you are now all members of The Guinea Pig Club.' The club gave me many things, a standard of friendship, confidants; we really opened our hearts to each other."

Living in Sunbury, Desmond and his wife Winifred are now assisted by the RAF Benevolent Fund. The RAF's leading welfare charity has provided house adaptations to make life a little bit easier for them both.

Des said: "The Benevolent Fund is always there to help.  To always have that makes life much easier somehow. It's jolly nice to be made a fuss of."