The Battle of the Somme began on 1 July 2016, as thousands of British troops climbed out of their trenches and into the barbed wire and machine gun fire of No Man's Land.

The disastrous first day brought 57,740 casualties, including 19,240 fatalities. But for the Royal Flying Corps (RFC), the predecessor of the Royal Air Force, the battle had begun a week before. 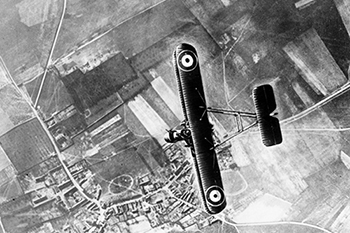 As the battle at Verdun carried on in early 1916, plans for an attack at the Somme took shape to both draw pressure off of forces at Verdun and to break through German lines.

Much of the planning relied on the RFC's aerial reconnaissance, which plotted German lines of communication, defences and logistics systems.

Yet aerial reconnaissance was only part of the RFC's task. Their fighters endeavoured to secure and maintain air superiority in a vital effort to prevent German aircraft from observing British preparations for the pending attack.

Further, a loss of air superiority would have further endangered reconnaissance aircraft, who were an easy target as they flew in straight lines at relatively low altitudes to take photos of German defences.

On 24 June, a week before British soldiers crossed into No Man's Land, a heavy barrage of British artillery was launched against German trenches, lines of transport, supply depots and artillery positions. The RFC had plotted many of these targets in the preceding weeks and ongoing flights helped direct the barrage to targets.

Despite these efforts, the British troops emerging from their trenches faced a hostile environment in No Man's Land as lines of barbed wire remained uncut and German forces had survived the week-long barrage. It was to be the start of 141 days of brutal warfare both on the ground and in the air.