The battle waged from above

The enduring images from the Battle of the Somme are of soldiers climbing out of the trenches to face the onslaught of machine gun fire and barbed wire in No Man's Land. But even years before the start of the war, prescient officers saw the future of air warfare. 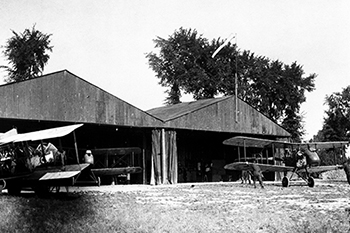 DH2s of 29 Squadron pictured at Abeele, on the Belgian/French border, in the summer of 1916. (Photo: Air Historical Branch)

In the week before the land battle began, the Royal Flying Corps (RFC) had been tasked with maintaining air superiority, gathering reconnaissance, and directing the British artillery bombardment of the German front line.

As the land battle began, these air activities continued at a frenetic pace and the ability of British airpower to affect the result of a battle was first proven in the Battle of the Somme.

In particular, RFC artillery spotters were key in directing artillery to more than 8,600 targets such as supply depots, troop reinforcements, and enemy artillery installations.

Yet the Royal Flying Corps paid dearly for their valuable service, with 499 aircrew killed, wounded, or missing and a loss of almost 600 aircraft.