In 1948 the President of the United States, Harry Truman, launched Operation Plainfare, to urgently deliver food and supplies to the people of Berlin. The mission was in answer to the Berlin Blockade, one of the first major international crises of the Cold War. Now 70 years on, we look back on the RAF's involvement during this humanitarian aid mission. 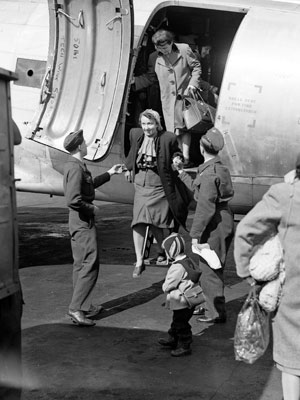 At the end of the Second World War, defeated Germany had been carved up by the Allies with essentially America and Britain controlling the western part, and the Soviets, the eastern. The city was reached by agreed road, rail and river routes. However in April 1948 the Russians began interfering with the Allied movement, blocking all surface routes to and from Berlin and deliberately attempting to force the Western Allies out.

Though some in the United States President Truman's administration called for a direct military response to this, Truman worried such action would trigger another world war. Instead, he authorised a massive airlift operation, which lasted for almost a year, in a bid to relieve Berlin and its people.

More than 200,000 flights were flown during that year, providing West Berlin with up to 8,893 tons of provisions each day, such as fuel and food.

The RAF ceased Operation Plainfare at the end of August with more than 100 RAF aircraft involved and delivering almost a quarter of the freight to Berlin. Tragically, during the airlift, the RAF suffered five major aircraft accidents, killing 18 airmen.

In the years which have followed the RAF has been at the centre of countless humanitarian aid missions, relieving the suffering of those caught up in conflict, natural disaster and drought.

Today the RAF continues to provide humanitarian aid, delivering supplies around the world, in instances like in 2017 when the Caribbean was hit by Hurricane Irma, the RAF provided humanitarian assistance in the aftermath of the cyclone for five weeks.