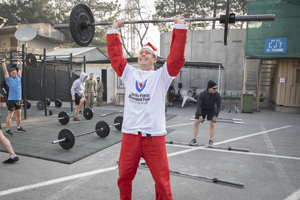 Their efforts included eating Christmas dinner on a spinning bike and completing no less than 125 laps of the camp in Afghanistan. Supported by the wider RAF contingent as well as personnel from all nations of the coalition, the event, organised by Squadron Leader Steve Riley ran, spun, crunched and served their way through a grueling 24 hours.

He said: "We pulled together as a team to get each other through, especially through the early hours, when we were getting really tired. The best part though, was seeing all our friends from other nations, including Afghanistan, throw themselves into the challenge.  It was a great experience."

Steve was joined for the whole 24 hour period by Wg Cdr Claire O'Grady, Maj Danny Murphy, Flt Lt Daisy Tidbury and Flt Lt Steve Moore.  Over the course of the physathon, the team completed 125 laps of the camp, powered through four hours of spinning, completed 45 workouts of the day in the Crossfit cage, six hours of circuits, an RAF vs Army Volleyball tournament, yoga and pilates to ease the creaking muscles, before ending with a final victory lap of the base.

To keep the team fueled and not miss out on the Christmas Day cheer, Air Cdre Dean Andrew and others brought the team Christmas dinner, which was gratefully consumed while spinning.  The Brass Quintet of the Band of the Royal Armoured Corps even pitched in to keep spirits high.

This is Steve’s fifth physathon in his career. Using his motivational and organisational skills, honed through years of experience as a Physical Training Instructor and Training Officer, he was able to draw upon the full support of NATO colleagues, in particular from the UK, USA, Germany, Italy, and Australia to make the event a resounding success.

Steve said: "We had a great team, saw a fantastic turnout, so many generous donations, so many smiles and shouts of encouragement, as well as support throughout the whole period from everyone here."

British troops are deployed in Afghanistan to provide assistance to the Afghan National Security and Defence Forces as part of the wider NATO Resolute Support Mission.  Personnel from all 3 services train, advise and assist their Afghan counterparts in key areas such as developing the Afghan officers of the future at the Afghan National Army Officer Academy, whilst British troops of the Kabul Security Force provide their protection and security as they move around Kabul. The RAF provides a detachment of Puma Helicopters that moves coalition personnel and equipment around the capital.