Enduring friendship and camaraderie borne out of shared experiences has bound a unique group of military veterans for more than 70 years. This week they gathered at Princess Marina House for a gala dinner.

The Guinea Pig Club, so-called because of the experimental nature of their treatment, was made up of mainly RAF servicemen who were burned during World War II. 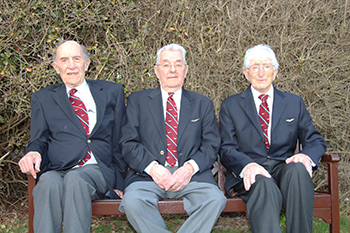 What started out as a social drinking club for those undergoing pioneering plastic surgery and burns treatment, has become a legacy to inspire those injured in service today.

The club's annual dinner, now held at the RAF Benevolent Fund's Princess Marina House, reunites club members, veterans and surgeons, to celebrate their remarkable resilience in the face of such horrific injuries.

Ninety-two-year-old Sandy Saunders suffered 40 per cent burns to his face and legs when the glider he was piloting crash landed. He said: "We were patients with a lot in common we had uncomfortable treatment and there was always somebody worse than you were, you tended to accept your disfigurements or other problems. You could not feel sorry for yourself when you saw people who'd had 60 operations, which was commonplace and people who had lost both legs."

East Grinstead became the spiritual home of The Guinea Pig Club and a statue honouring Sir Archibald McIndoe, who treated the veterans and developed methods which are still used today, now stands in the town.

Sandy added: "When we were at Buckingham Palace at a garden party we met a young man who recently had been burned in a tank. He was a soldier. He was about 20 and he had his head covered with bandages and dark glasses and I think he had lost part of his ears and his scalp. I felt I was doing him good."

Doug Vince, 92, was a flight engineer on a Stirling bomber when his aircraft was shot down. Doug managed to crawl out of the wreckage to safety but suffered severe burns to his hands when he picked up a fire extinguisher to try to put out the flames. At the time, the Fund helped Doug and his wife by paying for a £200 deposit to buy a house.

He said: "I remember my mother coming in to the ward where we were all bandaged up, except for a hole to breathe in, and saying 'which one is my son'. Archibald McIndoe was a wonderful man. He did two operations and allowed me to open the hand and do most things without any trouble."

Friendship helped Sandy, Doug and their fellow comrades to heal and now, more than seven decades later, their fellowship is helping veterans of conflicts in Afghanistan and Iraq to face the future with hope.