"We knew we were outnumbered...but the pilots still went into the skies to protect us"

'The Few' Battle of Britain pilots were immortalised by Prime Minister Winston Churchill in a speech to the nation in September 1951. As a member of the ground crew of 609 Squadron, the late Stan Hartill became friends with many of the pilots and saw first hand their bravery and sacrifice. Years later, Stan shared his memories with us.

"During the Battle of Britain we knew we were outnumbered. But the pilots just carried on and it didn't matter what the odds were against them, they still went into the skies to protect us. 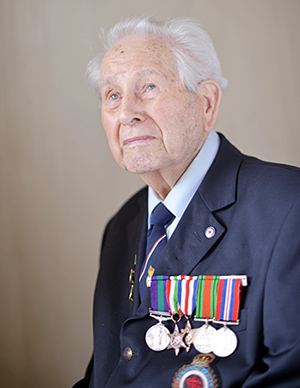 "I recall one Saturday night about 5pm and our Squadron was scrambled to meet some German bombers and when they came back I asked the pilot, 'How did you get on Sir?' and he said, 'Do you know there are hundreds of them and they are simply pattern bombing London and Hartill, there is nothing we can do to stop them'.

"And that was one of the moments that we felt, 'God Almighty, we are losing this at the moment'.

"Those pilots were so young and we had nothing but admiration for them. I remember one day I looked after John Dundas' Spitfire (Dundas was a flying ace who was later awarded the DFC.

"He was killed, missing in action, aged just 25) and he shot down a very famous German air ace and I spoke to him afterwards and he said 'I've got one and I think I might have a half so I'm going to claim a one and half Hartill!' He was such an educated man – and he always took the time to speak to me.

"For these young lads to take these Spitfires up against the Germans day after day – their morale must have been wonderful.

"We respected them so much. The pilots were friends to the ground crew - we were sort of drinking out of the same cup – we were all living together, we spent our lifetime at the dispersal points – the pilots had their rooms and we had ours – but we were always so friendly.

"Had it not been for those young men, whose daring and devotion cast a glittering shield between us and our foe, we should none of us be sitting at rest in our homes this Sunday evening, as members of an unconquered and, as we believe, unconquerable nation."
Winston Churchill

"I remember one time a Spitfire landed and all of a sudden it had stopped quite far away from us. I thought something was wrong and I ran for all my life – about a quarter of a mile – towards it and jumped up onto the wing.

"The pilot had been in a dive and his seat had collapsed with the G force which had damaged his control rods and yet this pilot had somehow got that Spitfire back to the landing field with those damaged instruments and the poor man had broken his back as well. When you see that – that's dedication. What those pilots put themselves through – they were amazing.

Of course we lost pilots and there was a certain amount of sadness but we would never refer to a pilot as having died – there's an RAF saying – 'Billy Brown has bought it' – that’s what we'd say if a pilot hadn't made it. And if a Spitfire went down in the sea we'd say, 'It's gone down in the drink'."