Why it's important to remember The Few

The Second World War was the most destructive our world has ever witnessed. Cities, whole countries were changed beyond recognition and the outcome of the war still has an impact today.

Remembering, and more importantly understanding, the violence and barbarism we are capable of inflicting gives the younger generation a chance of building on those lessons and learning from them. 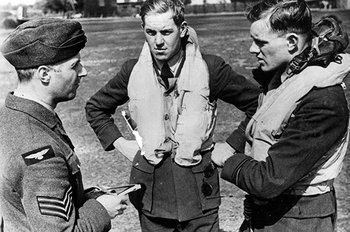 One of the privileges of an historian is to hear, first-hand, the testimony of living history, from those who lived it. I love hearing the stories of veterans remembering events which took place 75, 80 years ago.

I have been privileged to hear from men – pilots and crew - who were at the heart of that, to hear of their extraordinary experiences, to learn of their unimaginable courage, selflessness, comradeship and stoicism – their stories are utterly humbling, yet they never saw themselves as heroes – they had a job to do. We owe them and all those serving then in the Royal Air Force, whether in the air or on the ground a huge debt.

It is vital that we listen to these stories, while we still have these veterans to tell them, to hear of the sacrifices they made and ensure history is never repeated.

The Battle of Britain itself was one of the most decisive battles of the Second World War, characterised by the brutal dogfights of the Allied Forces and Luftwaffe in the skies above Britain. The Royal Air Force was out-numbered and in retreat once Hitler's troops had marched across Europe. It was the turning point for the German forces, the beginning of the end of their plans for domination.

Spitfire and Hurricane pilots scrambled to their aircraft when Britain came under attack, would go up time and time again, bravely, blindly in defence of their country. Ground crews below slept under the wings of the aircraft they serviced, all ready to respond at the ring of a bell. And of course, the often overlooked Bomber Command crews were flying sorties over Germany targeting the Luftwaffe on the ground.

Dan Snow will be hosting the RAF Benevolent Fund's The Big Battle of Britain Virtual Quiz on 11 July, supporting serving and retired RAF personnel and their families. Why not sign up to take part?