When Stan Hartill joined the RAF at the age of 19 as a member of the RAF ground crew servicing Spitfires, he could never have known that over 75 years later he would be receiving France's highest decoration, the Legion d'honneur for his services during the D-Day landings. 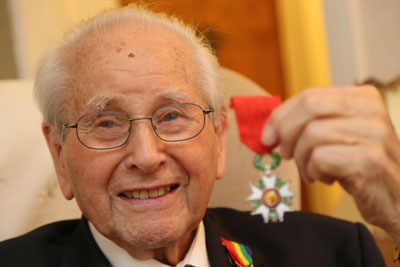 On June 10 1944 Stan, now 95, was a member of RAF Servicing Commando, a group of highly skilled ground crew who were responsible for setting up an airstrip in Normandy.

It was thanks to the efforts of this elite group that our Spitfires could land, be serviced and refuel on French soil before returning to combat.

Stan said: "We were the first members of the RAF to land in Normandy. We serviced the first 36 Spitfires to land - we had to refuel them using jerry cans – a Spitfire holds 84 gallons and the cans held just over four gallons – so it took some time!

"The great thing was that instead of flying all the way back to England we refuelled and rearmed them and one minute later they were over the frontline helping our gallant soldiers."

Along with his medal Stan received a letter from the French ambassador in London, Sylvie Bermann which thanked him and his comrades for the sacrifices they made for France’s freedom.

"As we contemplate this Europe of peace," the letter said, "we must never forget the heroes like you, who came from Britain to begin the liberation of Europe by liberating France.

"We owe our freedom and security to your dedication, because you were ready to risk your life."

Stan believes he may be the first member of the RAF ground crew to receive such an honour.

"I never thought when I was a humble AC2 earning 10p a day that I would receive such a medal for bravery. I will treasure it for the rest of my days. I really am humbled."

The RAF Benevolent Fund supported Stan when he was struggling to pay the maintenance charge on his flat.