During the Second World War, a myth began to circulate that the RAF did not do enough to protect the troops that were trapped on the beaches and the fleet of vessels trying to evacuate them. The RAF, however, were facing numerous challenges as the German Luftwaffe sought to dominate the skies over northern France. 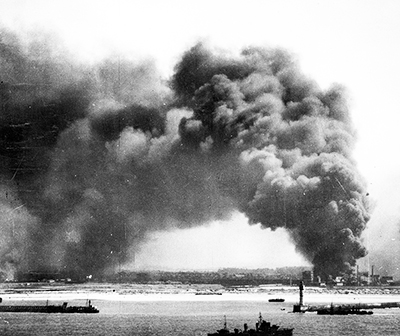 Photo taken during the evacuation of the British Expeditionary Force from Dunkirk, showing a huge plume of smoke billowing over the area from burning oil tanks. (UK Crown Copyright / MOD. Courtesy of Air Historical Branch, RAF)

At the start of the evacuation, RAF Fighter Command had been attempting to maintain continuous daytime patrols over France. These operated on patrol lines principally from Gravelines to Furnes and further inland from Dunkirk to St Omer and Furnes St Omer.

One reason why the myth grew amongst the Army that the RAF was absent from Dunkirk was simply because the deeper patrol lines were not visible to those trapped in the town or on the beaches.

Furthermore, the patrols were usually only at squadron strength and the RAF were frequently outnumbered by the Luftwaffe who made several successful attacks on the town and port, and severely disrupted the evacuation.

On 28 May 1940, 12 patrols were flown at an average strength of two squadrons, with 321 sorties being carried out. Some squadrons were only able to put up less than the full squadron strength of 12 aircraft and the RAF twice clashed with very large formations of German aircraft.

On 29 May, because of the size of the enemy formations met on the previous day, the patrols were adjusted again to try to have four squadrons in the vicinity of Dunkirk at any one time. But this meant an absence of fighter cover for periods of up to an hour and a half.

Between 30 May and 4 June, Fighter Command despatched 109 sorties but 27 were at full strength of 12 aircraft. The pressure on Fighter Command was such that some four squadron patrols actually involved aircraft from up to eight squadrons.

From 1 June it was decided that the evacuation would proceed only by night and this greatly eased Fighter Command's problem as it could concentrate its patrols around dusk and dawn to cover ships approaching or leaving Dunkirk, although the absence of RAF aircraft in the middle of the day also led to further unfavourable comments from the troops on the ground.

During the last three days of the operation, from 2-4 June, the casualties due to bombing were reduced but this was in part due to poor weather hampering Luftwaffe operations, and also due to the latter operating against targets elsewhere in France. Overall, though not effective at all times and all days the RAF fighter effort undoubtedly made a valuable contribution to the success of the evacuation.

Aircraft from both Bomber and Coastal Commands also participated in operations around and over Dunkirk with Bomber Command intervening effectively on a number of occasions against German troop concentrations, road columns and artillery shelling the beaches, whilst Coastal Command operated against German E-boats, and to a lesser extent submarines which were attempting to disrupt the evacuation.

Over the nine days of Operation Dynamo, the RAF flew 2,739 fighter sorties, 651 bombing raids and 171 reconnaissance flights. Fighter Command claimed 262 enemy aircraft, losing 106 of their own.

Get our latest news

For more WWII stories and news about our events and activities, sign up to our e-newsletter.

An RAF officer examines the wreckage of a crashed German Dornier Do17 bomber which had been shot down by RAF fighters over France in early June 1940. (UK Crown Copyright / MOD. Courtesy of Air Historical Branch, RAF)

An airman finds time to write home during a period of relative calm at an airfield in France in June 1940. (UK Crown Copyright / MOD. Courtesy of Air Historical Branch, RAF)

A Hudson aircraft of Coastal Command over the flotilla of vessels gathering to rescue the soldiers from Dunkirk. (UK Crown Copyright / MOD. Courtesy of Air Historical Branch, RAF)

A Hudson aircraft of 220 Squadron, Coastal Command, over the beach with burning oil tanks in the distance. Image taken during the evacuation of Allied troops from Dunkirk in June 1940. (UK Crown Copyright / MOD. Courtesy of Air Historical Branch, RAF)