"There was an atmosphere of thanksgiving that it was all over"

While Britons flooded into the streets to celebrate the end of war in Europe, the crews of Bomber Command remained cautious. Their minds turned to their comrades on the Eastern Front for whom peace was still some way off. On the 70th anniversary of VE Day, veteran Dave Fellowes describes what it was like. 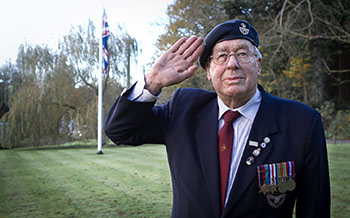 As the war drew to a close Dave and many of the Lancaster crews took part in Operation Exodus, bringing Prisoners of War back to the UK as well as Operation Manna, dropping food parcels to the starving Dutch.

Both these operations would not have been possible when fighting was at its most intense.

Dave remembers talk of peace before the official announcement was made. There was newspaper speculation too, heightened by Hitler's suicide a week earlier.

"I do recall that nobody on our mess got really drunk because on an Australian squadron they all had a lot of people in the Far East still. I remember seeing a picture of Churchill on a balcony with millions of people down below."

Dave, a rear gunner, had been involved in the last raid of the war at Berghof, Hitler’s home in the Austrian Alps shortly before the German surrender was made official on 8 May, 1945. After their humanitarian work was complete, Dave and his squadron were told they would be sent to the Eastern Front to be part of Tiger Force. But before they could deploy Victory in Japan was agreed.

Dave remembered: "There was an atmosphere of thanksgiving that it was all over. People could relax a little bit more and they relaxed a bit more than that, especially after VJ Day. The war was over and everybody thanked God for that.

"We did not do anything special about it because we did not know what we would be called to do. The war in Japan was not over that did not finish until August."