Born in New Zealand in 1900, Sir Archibald McIndoe was destined to be a gifted and talented surgeon. By the outbreak of the Second World War, there were only four fully experienced plastic surgeons in Great Britain – Sir Archibald being one. 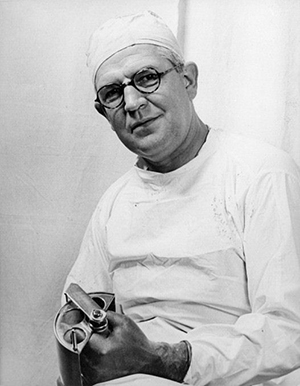 As the casualties of the war came flooding in, it became clear – certainly in the Queen Victoria Hospital in East Grinstead, where Sir Archibald was based – that the volume and severity of injuries would be unparalleled and unlike anything the hospital had seen before.

Sir Archibald said, The Guinea Pig Club "has been described as the most exclusive club in the world, but the entrance fee is something most men would not care to pay and the conditions of membership are arduous in the extreme."

A special ward, Ward III, was allocated for Sir Archibald’s patients. The majority of injuries were caused when aircraft fuel tanks ignited, often engulfing the crew in flames before they could escape. Despite wearing heavy duty flying jackets and trousers, their hands and faces were often exposed and bore the brunt of the inferno, causing terrible, life-changing injuries.

Before 1939, burns victims rarely survived their injuries and Sir Archibald realised early on the woeful inadequacies of burns and plastic surgery treatments.

He devised new ways to treat burns including the use of saline to bathe them and he secured the banning of tannic acid, which had been routinely used to treat burns, often with disastrous consequences for the patient.

Sir Archibald was also interested in the psychological effects on his patients and he championed their rehabilitation back into the community. First-hand accounts from the Guinea Pigs themselves tell of Sir Archibald’s tireless determination to ensure that none of his patients would experience prejudice or discrimination once they left the confines of the hospital.

He hosted seminars and lectures at the hospital, arranged concerts and sporting events in the grounds and visited local pubs encouraging the town to welcome these young men into their community and not shun them.

Sir Archibald insisted that his patients be allowed to wear their uniforms outside the hospital, rather than the 'convalescent blues' issued to invalided personnel. The psychological boost to the mental well-being of these young airman, to go out into the community wearing their RAF uniforms with pride, was incalculable.

It was no wonder that Sir Archibald became known as 'the Boss' on Ward III. Asked if he had always been such an outstanding surgeon, Sir Archibald said: "A good, competent surgeon, experienced, yes...but when I looked at a burned boy for the first time and saw I must replace his eyelids, God came down my right arm."